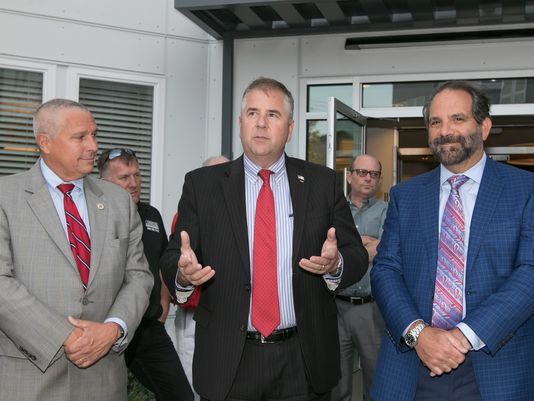 “We’re pretty excited,” said Weiss, whose company, Weiss Properties, this week celebrated the grand opening of The Cobalt apartments on Veterans Memorial Drive  and will be starting construction on The Davenport, a 60-unit apartment building on Davenport Street, early in 2018.

And Somerville appreciates the faith that Weiss has shown in the county seat, Mayor Brian Gallagher said.

“You’ve taken a piece of property that has been fallow for a number of years and turned it into a destination,” Gallagher said.

The Cobalt Apartments on Veterans Memorial Drive in Somerville celebrated its grand opening this week. (Photo: ~Courtesy of Weiss Properties)

The property, which backs to NJ Transit’s Raritan Valley Line and is two blocks from the train station, was once a junkyard and was once eyed as home to the borough’s emergency services.

Gallagher said Weiss’ investment is a vote of confidence in Somerville’s future and the revival of its downtown.

“The private sector will go where there is a return,” Gallagher said. “They’re investing in the entire community.”

Gallagher said Weiss was the first developer to visit him when he first took office 14 years ago and immediately he knew they would be working together.

“We’re not done yet,” Gallagher said.

Weiss returned the compliment to Gallagher, saying. “He has a total passion for this town.”

The 117-unit Cobalt is 50 percent leased, Weiss said. All but one of the studio apartments have been rented and there are 32 one-bedroom apartments remaining, said Magaly Zuniga, the property manager.

Many of the new tenants, Zuniga said, are young professionals and out-of-state residents relocating to Central Jersey for jobs.

Santangelo came to Somerville from Stony Brook, Long Island, and commutes by train to Manhattan for his job as an environmental consultant. Cordell got a job as a music teacher at Branchburg Central Middle School and moved here from northern Virginia.

“We decided to split the difference,” Santangelo said.

The Cobalt features a fitness center, a club room with a pool table and kitchen, a courtyard lounge, a srmartphone security system and an attached parking deck. Each apartment has a washer and dryer, built-in microwave, walk-in closets and granite countertops.